For a long time now we have wanted to feature one of Cape Town’s unique coffee venues, namely Truth Coffee HQ in Buitenkant Street. When we came across a recent video featured by VISI magazine, we were motivated to get out of the starting blocks.

Quite a while back whilst exploring the The Fringe Design District we were introduced to the rather eccentric and dedicated coffee meister and owner of Truth Coffee, David Donde. At that stage Truth HQ was still a couple of days away from the grand opening and we were lucky enough to have the first look around. We also had the chance to chat with David (and his Victorian-styled moustache which I assume he cultivated especially for the HQ opening) and have a complementary brew of Truth’s delicious coffee. One thing was immediately apparent – David is extremely passionate about his craft. 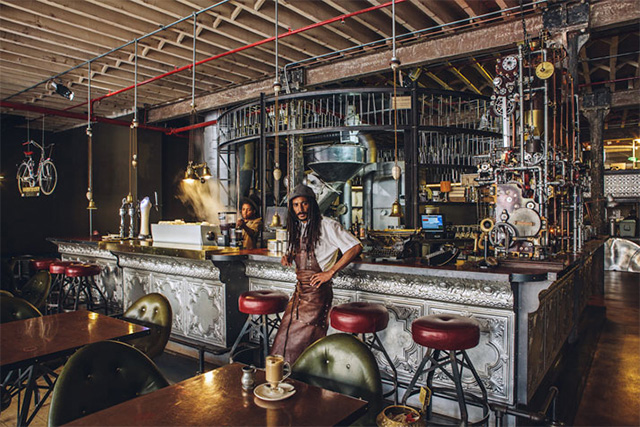 The task of creating an out-of-the-box interior to compliment the Truth brand fell to talented designer Haldane Martin. In a past interview with Visi Magazine, Haldane says “that it was David’s ‘mad cap, inventor’ personality that inspired him to suggest steampunk and that it was an immediate fit. David has certainly gone all out with bespoke head-to-toe costumes from the Little Hattery, and an upcycled and functionally enchanting interior design by Haldane. ‘You can’t just glue some gears on and call it steampunk,” admonishes David, “the Truth brand is based on authenticity.'”

To those unfamiliar with the concept of Steampunk… it might be a little difficult to explain. You see, Steampunk is in essence a literary genre – a subgenre of science fiction and fantasy that often includes social or technological facets of the 19th century (think of some the novels written by Jules Verne or H. G. Wells).

“Steampunk works are often set in an alternative history of the 19th century’s British Victorian era or American “Wild West”, in a post-apocalyptic future during which steam power has regained mainstream use, or in a fantasy world that similarly employs steam power. Steampunk perhaps most recognizably features anachronistic technologies or retro-futuristic inventions as people in the 19th century might have envisioned them, and is likewise rooted in the era’s perspective on fashion, culture, architectural style, and art.” – Wikipedia on Steampunk

Now if I had to explain Steampunk as an interior style to somebody who has never heard of it I would probably describe it as Victorian Industrial meets futuristic fantasy. It’s a combination of exposed industrial elements like gauges, cogs, gears, pipes and other nifty mechanisms – all in brass or copper, and the more luxurious and opulent aspects of the Victorian age like dark wood panelling and deep-buttoned furniture pieces in rich velvets or leather.

While you watch the video, bear in mind that we are being exposed to the art and craft of industrial design – something that not many of us are able to catch a glimpse of often.

{Are you rushing for that cuppa coffee yet? Truth HQ is a MUST visit!}