Rose and I are super excited and geared for the Design Indaba Festival 2015 – that right this year they have dubbed it a “festival”… and what a delicious festival of creativity it is!

The brilliant FilmFest kicked off the official Indaba festivities last Friday and the Conference and Simulcast start tomorrow. Then on Friday the doors will be thrown wide open to welcome the public to the amazing eye-candy experience that is the Expo.

Oh, and don’t forget the music – if you want some local head-bopping, hip-swaying, foot-tapping entertainment the Design Indaba music circuit will be grooving from 25 to 27 February.

The Design Tabloid has, like the previous 3 years, received media accreditation for the 2015 Indaba and we will not only be attending the Expo but also the Conference Simulcast! Lucky, lucky ladies we are!

“Dubbed ‘the Conference on Creativity‘, the Design Indaba Conference is all about how design, creativity and innovation can positively impact the world. In 2013 the likes of Creative Review editor Patrick Burgoyne said it is ‘perhaps the best design conference in the world‘”

I sure I will get all lyrical about the conference yet again… it blows my mind consistently every year! It’s THE not-to-be-missed creative inspiration event of the year. Be sure to check our Twitter & Facebook feeds during this period as we will endeavour to post regular little snippets of our conference experience!

Now, this year’s EXPO promises to be even bigger, cementing the platform’s position as the go-to destination for taking the pulse of South African creativity. To get you all psyched for this year’s Indaba here is some highlights from the horse’s mouth…

“For 28 hours, over three days next weekend (Friday 27 February to Sunday 1 March) the Cape Town International Convention Centre will be abuzz with things to see, do, experience, make, create, shop, eat – it’s the ultimate inspirational indulgence.”

Design Indaba Expo’s distinguishing characteristics are two-fold: it showcases exceptional design across all the creative disciplines (from architecture to jewellery design, fashion, visual art, craft, industrial design and everything in between); and it sets an exceptionally high professional standard. More than 400 exhibitors will be strutting their creative stuff this year at the Expo. The always-popular Emerging Creatives platform again promises to bear testament to the scope of ingenious young designers in South Africa

I also can’t wait to see this year’s MBOISA (Most Beautiful Object In South Africa) nominations in the flesh (you can take a peek at the nominees: here). Then there is the fashion shows, delicious food & pop-up restaurants, workshops, talks, and much, much more….

EXPO Tickets available at the door or through Computicket

I perused all the trailers of the films and doccies that will be screened at the FilmFest and there are two I’m dying to see. One – a doccie about  quirky and infamous art forger, Mark Landis, the other – a Tim Burton film about the life of artist Margaret Keane. See the deets and trailers of both below:

Oh, and see you at The Labia!

This documentary follows the story of one of America’s most prolific art forgers, Mark Landis.

With a career spanning 30 years and a talent for painting and drawing across different art styles and periods, Mark Landis is a master art forger. This film follows the cat and mouse chase between Landis and art registrar, Matthew Leininger.

Once duped by Landis’ skill, Leininger is now consumed by the desire to expose Landis’ charlatanry. But Landis isn’t in it for the money. He’s donated his forgeries to hundreds of institutions across the states. When asked why he thinks it is that he hasn’t been prosecuted, Landis answers “’Cos I haven’t done anything wrong or illegal. I decided to be a philanthropist.”

Directed by Sam Cullman and Jennifer Grausman and co-directed by Mark Becker, the humorous film leaves you unsure of where your sympathies should lie.

“There is a kind of performance art quality to the act,” says Leininger.

Director Tim Burton lets the viewer step inside the life and work of acclaimed American artist Margaret Keane in this brilliant, biographical comedy-drama.

Based on the true story of Tennessee-born artist Margaret Keane, the film Big Eyes takes the viewer on a journey filled with the highs and lows of Keane’s creative endeavours.

Keane painted women and children mainly, recognisable by their oversized, doe-like eyes. In the 1960s, she burst onto the San Francisco art scene where her works became collectors’ items and were sold as original oil paintings, prints, postcards and posters. However, her then-husband, Walter Keane, took praise for her work and sold the unique paintings under his own name.

Big Eyes, directed by Tim Burton and starring Amy Adams and Christoph Waltz, follows Margaret’s journey from a promising artist to her heated divorce trial where she accuses Walter of stealing the credit for her work.

FilmFest kicks off with Tim Burton‘s “Big Eyes” on Friday 20 February at the Labia Theatre. If you want to take a peek at the FilmFest program or you want to book tickets, see the Design Indaba website here: http://inda.ba/film2105

It’s our great pleasure to once again share the much-anticipated Most Beautiful Object in South Africa (MBOISA) 2015 finalists with you. Beauty is profoundly subjective, at times even divisive. This year’s nominations feature a wildly mixed bag – from the personal to the practical to the political…

I won’t lie, I was rather surprised by some of the choices. I mean, a DSTV decoder is not my idea of a beautiful object. I am however sure the reasoning behind its nomination was sound. My vote would probably be a toss-up between the funky Haywire Chandelier by David Krynauw or the beautifully whimsy Centre Point: Dancing Ballerina by Llewellyn Davies.

The winner will be determined by public vote. Vote for your most beautiful object in South Africa, via SMS or online. The designs of all the MBOISA finalists will be on show at Design Indaba Expo, open to the public from Friday 27 February to Sunday 1 March at the Cape Town International Convention Centre.

{Go to the Design Indaba website (here) for a full description of each finalist’s design and to vote!}

2DO Stackable Storage Tower by De Steyl + Renée Rossouw Studio | To vote for this object, SMS “TOWER 4 MBOISA” to 40619.

The Boomslang by Mark Thomas Architects and Henry Fagan & Partners | To vote for this object, SMS “BOOMSLANG 4 MBOISA” to 40619.

Haywire Chandelier by David Krynauw | To vote for this object, SMS “CHANDELIER 4 MBOISA” to 40619.

Silk Organza and Leather Floral Dress by ERRE | To vote for this object, SMS “DRESS 4 MBOISA” to 40619. 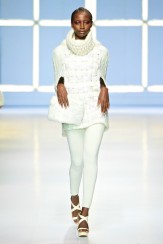 Milk Mohair and Wool Felted Cape by Milk: Mohair She Felt | To vote for this object, SMS “CAPE 4 MBOISA” to 40619.

Kitale Drinks Cabinet by Tonic | To vote for this object, SMS “CABINET 4 MBOISA” to 40619. 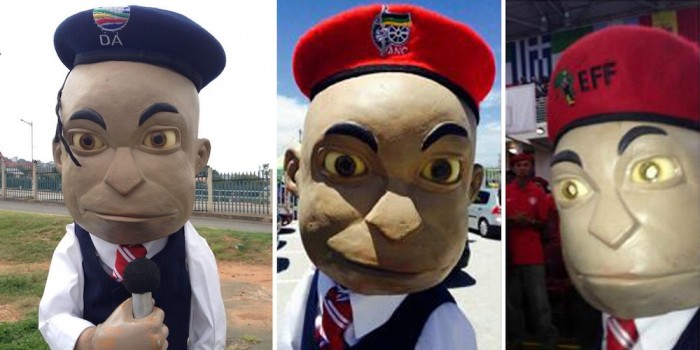 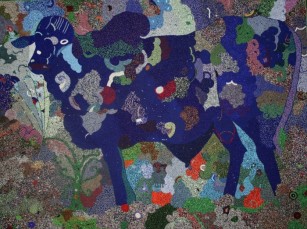 Explora Satellite Decoder by MultiChoice, manufactured by Pace | To vote for this object, SMS “DECODER 4 MBOISA” to 40619.

{All info and images via Design Indaba} 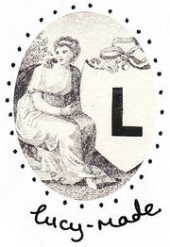 I have to confess the Emerging Creatives exhibitors is my favourite part of the Design Indaba Expo each year. I would have no problem skipping the main exhibition space and head straight for the Emerging section. I guess one can easily get tired of seeing the same faces, designs, and product – the Emerging Creatives however always offer something fresh and new.

The stand was a little unassuming and I almost walked straight past without giving it a second glance… then the brooches called to me. Okay-okay, that might be a little dramatic but seriously they were beautiful and like nothing I have ever seen before. The brooches are made using white earthenware clay and decorated with under-glaze ceramic paints with touches of gold luster. I loved the large cameo designs and the gorgeous colour selections – the inky blue looked especially beautiful paired with the gold. My absolute favourite was the brooch featuring a rather stately looking gentleman with a red pinstripe background. The Lucy-Made ceramic collection includes earrings, bracelets, buttons and, of course, the above mentioned brooches.

Lucy also designed a stationery collection which comprises of hand-bound note and sketchbooks made of recycled paper and covered with envelopes and old South African naval stamps. 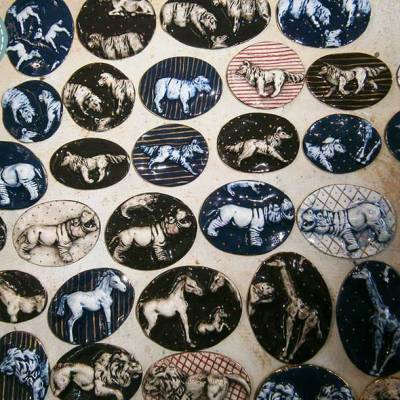 And the winner, by public vote, for Most Beautiful Object in South Africa 2014 is…

Steam 1886 is a short fantasy video showcasing the fashion, hats, gadgets and lifestyle that could have been the future of 19th century steampunk culture.

The film portrays the decadent nature of the steam era with strong gun-slinging women and rough grizzly men. An ominous presence is felt throughout the video until attack strikes, where the only thing that remains is the elaborate fashion. This outcome evokes the idea that generations disappear but fashion lives on forever. The wardrobe, hair, makeup and accessories in the film are all as beautiful as the video itself.

“It all came about after weeks of mulling over an idea to shoot a Steam Punk fashion video right before the summer production season hots up in Cape Town. I had the idea, but no location to shoot it in. I then walked into David Donde’s new Truth Coffee shop in Cape Town, and knew that it was the perfect location for the video.” ~ Adrian Lazarus (Director)

Directed by Adrain Lazarus and Nicky Felbert, the film is shot inside of one Cape Town’s creative hotspots, Truth Coffee. With the exception of the vintage fixtures, Truth’s interior and furniture were specially designed for Truth Coffee by Cape Town designer Haldane Martin and his interior design team. The result is an iconic space with an authentic steampunk character.

{What do you think of this year’s MBOISA winner? Who did you vote for?}

It’s our great pleasure to present the much-anticipated Most Beautiful Object in South Africa (MBOISA) 2014 finalists. Featuring a mixed bag of finalists including film, fashion and photography, the MBOISA finalists were nominated by a variety of South African design journalists and cultural commentators.

“We know that beauty is in the eye of the beholder and that’s why the winner is determined by public vote. Vote for your most beautiful object in South Africa, via SMS. The designs of all the MBOISA finalists will be on show at Design Indaba Expo, open to the public from Friday 28 February to Sunday 2 March at the Cape Town International Convention Centre. The winner will be announced at 16:00 on Sunday 2 March at Design Indaba Expo.”

{Go to the Design Indaba website (here) for a full description of each finalist’s design and to vote!} 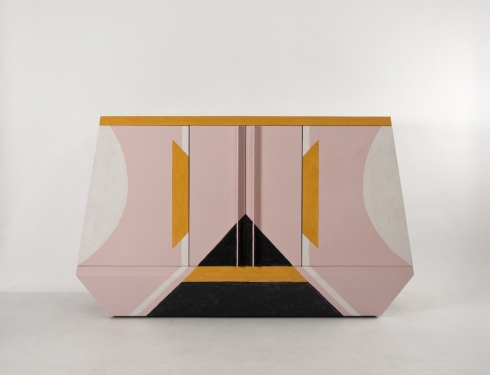 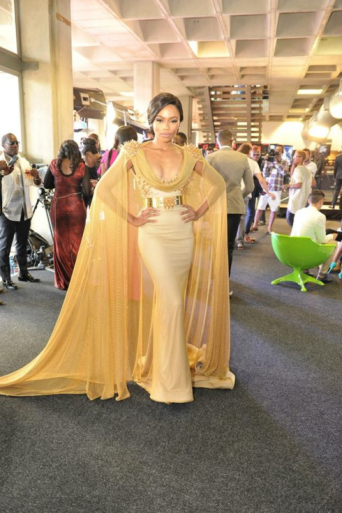 The Nelson Mandela statue at the Union Buildings nominated by Khaya Dlanga. 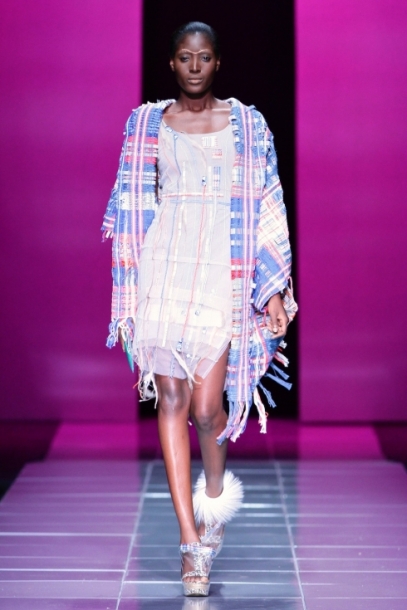 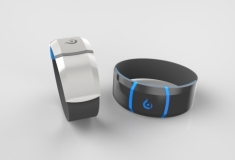 The Mojo Active Armband for Health Q by IDESO nominated by Mugendi M’Rithaa.

{All info and images via Design Indaba}