My fingers have been itching quite some time to attempt some of the ingenious DIY projects I have found on Pinterest. I have to confess the only reason I have not yet tried any of the DIYs I have so painstakingly pinned is that I’m all thumbs… that and quite lazy. The concrete projects especially have piqued my interest – they usually look super sleek and contemporary, not to mention very impressive. I’m also hoping that hearing the words “DIY” and “concrete” in the same sentence will convince my brother, the civil engineer, to be my DIY minion for a day (translation: I’ll sit on a chair with a tall drink shouting directions while he does all the heavy labour).

Mette from monsterscircus made these cool advent candle holders and small votives out of concrete. She used empty cool drink cans (that’s “soda” cans for our American friends) and water bottles as moulds. I love the glitzy paint-dipped effect, especially since metallics like gold and copper are currently trending – it adds a lovely rich and glamorous element to the concrete votives. Pop over to monstercircus for the step-by-step instructions: here.

Looks like a designer pendant lamp doesn’t it? You would have to fork over a bunch of cash if you spotted something similar in a retail space. Ben Uyeda of Homemade Modern only spent $9 (that’s about R 90) on this concrete pendant light that took him just 2 hours to create. With just a bit of ingenuity, you can make yourself an entire set of stylish concrete pendant lights with a single bag of concrete mix and some old plastic bottles. Want to try this DIY yourself? Check out Ben’s instructions: here.

Another SUPER awesome DIY project from Ben and the Homemade Modern team – concrete milking stools! Isn’t it absolutely adorable? Ben used an old 20 litre bucket (that’s 5 gallons for those not metric literate) as a mould for the concrete seats. These stools cost about $5 a pop to make! I think I’m definitely going to try these first! Check out the Homemade Modern website for the play-by-play: here. 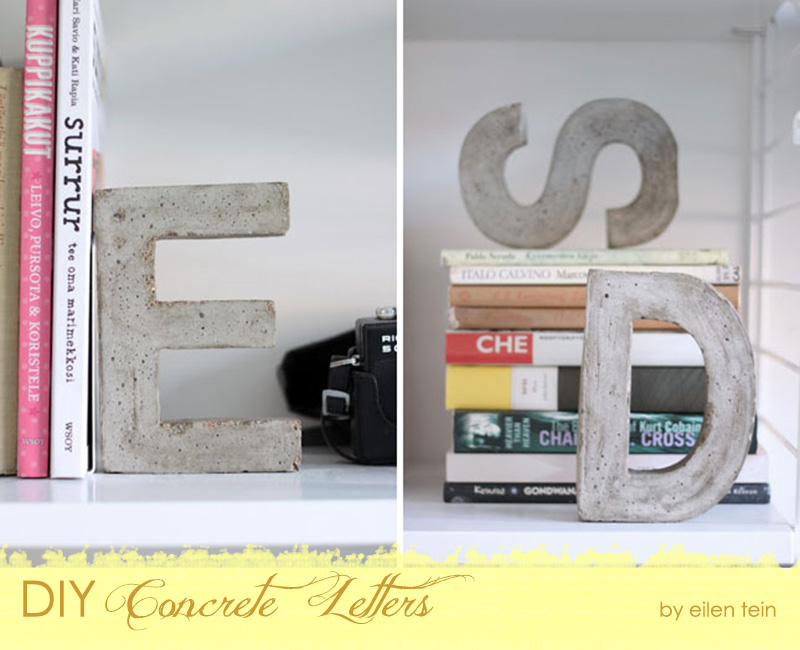 Eilen Tein deconstructed some cardboard letters she bought to serve as moulds for her concrete letters. These look absolutely smashing as bookends or as quirky décor on a mantle or shelf! Visit Eilen’s website to see her concrete alphabet recipe: here.

I love this minimalist concrete clock found on the blog Hobby Design. The South Korean designer responsible for making this definitely has a way with concrete… unfortunately Google Translate can’t seem to successfully translate the instructions to English. The images are pretty clear though. Mmm, maybe I can get my friend who has spent some time in South Korea to translate it for me…

{So, what do you think of these Concrete DIYs? Thinking of trying some? I sure can’t wait!}